In 1912, Carl Stearns Clancy undertook the longest, most difficult and most perilous journey ever attempted on a motorcycle. By June 1913 he had made history, becoming the first person ever to travel round the world on a motorbike. A century on, Geoff Hill recreates Clancy’s historic journey and ends up on the road trip of a lifetime. Following the same route, and with Clancy’s account of the journey echoing in his head, Geoff follows in the footsteps of the world’s first motorcycle adventure rider… 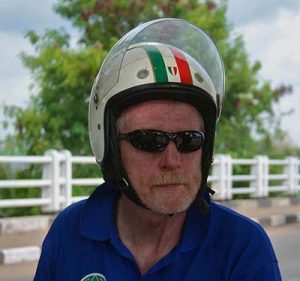 I stood in front of the 1912 Henderson in the National Motorcycle Museum of America, my arms full of boots and my mind full of wonder. For this was the only surviving example of the type of machine on which a man called Carl Stearns Clancy became the first to ride around the world in 1912-13.

If you’ve never heard of him, you are not alone: I hadn’t until 2011, when a Dublin biker called Feargal O’Neill told me that Clancy had set off from there on his epic ride in honour of his Irish parents. And the boots I was holding were the ones he had worn, which former TT racer Gary Walker and I had just carried around the world a second time in a recreation of that incredible journey.

When Clancy died in Virginia in 1971, his housekeeper had given them to Liam O’Connor, the 16-year-old son of neighbours. With the help of Dr Gregory Frazier, the American author who’d turned Clancy’s original magazine articles and photos into the 2010 book Motorcycle Adventurer, I’d tracked Liam down to the university in Western Australia where he was now a professor.

He didn’t need to be asked twice to donate the boots for another global adventure, and they were tucked securely into a pannier when Gary and I set off from Ireland in March 100 years after Clancy, and in the worst snow in living memory.

And so it begins…

Clancy had picked Dublin as his departure point to honour his Irish parents, and as we followed his journey down through England, the blizzards were so bad that at times we could hardly see our front wheels. In Holland, according to a historian we met, it was the coldest March since 1922, torrential rain followed us all the way down through France, and the day we crossed the border into Spain was the first time we saw the sun since starting.

Still, at least our bikes had heated grips which Clancy would have given both arms for. As it were. BMW R1200GS Adventures, they could hardly have been more different than Clancy’s 1912 Henderson – a 934cc inline four with one gear and no front brake which made 7bhp and was advertised at the time as the fastest motorcycle in the world.

A shirt, tie and ready for adventure

In Algeria, the roads were so good that he took it up to its top speed of 65mph, until his eyes watered so much that he decided speed wasn’t all it was cracked up to be, and returned to a gentlemanly pace more suited to his riding gear: a three-piece suit with shirt and tie, topped by a flat cap which in the Far East was replaced by a pith helmet he bought in Port Said.

In Sri Lanka, we found several of the simple government rest houses he stayed in unchanged in 100 years. Outside the one at Sigiriya, even the view was the same, past the red pillar box and the double-parked elephant to the royal fortress where Clancy clambered up a precarious wire and bamboo ladder to see the so-called Sigiriya damsels, frescoes of 500 celestial nymphs. Staggering into the cave and dusting himself off, he was delighted to find that they were, to a woman, topless.

At least he missed the monsoon rains; at times so relentless that we were forced to pull off the road and take shelter, huddling beside women like birds of paradise who waited under their umbrellas for the ancient rattling bus which plied the route. Above their heads, a row of fruit bats hung from the telephone wire, waiting for an urgent call from Colombo on when the mangos were due to ripen.

Hong Kong, with its modern natives and matching shops, came as a complete surprise to Clancy. Having read too many James Clavell novels, I fully expected to arrive there, spend three days negotiating a fiendishly complex business deal in fluent vernacular Cantonese, sign it with my personal chop, seal it with a bottle of 50-year-old Macallan, then go out for dinner with my Chinese mistress, having left several ex-wives at home in New York, Honolulu and Skegness.

Sadly, none of the above happened, but it was just as hectic, thanks to Peter Rolston, the former ITN and CNN presenter who’d read several of my books and who lined up a whirl of social engagements so hectic that after three days we left both sorry and glad: sorry because of the astonishing hospitality we had received, and glad because our livers couldn’t have taken much more of it.

In Shanghai, Clancy wrote in his diary: “Give China a little time, and she’ll not only have plenty of trunk roads, but one of the richest countries on the globe. Nothing can stop her.” His prescience was spot on: by the Roaring Twenties, Shanghai was the most stylish and decadent city in Asia, and after years in the communist doldrums, now has 3,000 skyscrapers, more than New York, with another 2,000 planned. By 2020, it’s expected to be the richest city in the world.

We were shown around by the wonderfully named Kent Kedl, who sounded like one of Superman’s mates but in fact ran a company specialising in hostage negotiation. At one point, Gary spotted a stall selling a Chinese fighter pilot’s helmet for which the stallholder was asking 320 yuan, or about £32. “How much should I offer her?” he asked Kent. “Same tactics as hostage negotiation. Offer her 30 per cent, then walk away,” laughed Kent. He was right, of course, and two minutes later, Gary walked away 12 quid lighter and a helmet richer.

Japan to the USA

In Japan, the locals had a quaint habit of dashing out of their homes and into the road when they heard Clancy’s horn, thinking it meant the arrival of the fried fish salesman, the pipe cleaner or the clog mender. Still, apart from kamikaze pedestrians, rickshaws and carts, he had the roads to himself, since he saw no motorcycles and only a single car in his whole time in Japan. It is, as you can imagine, much the same today.

In San Francisco, we met up with Dr Frazier, his riding mate Richard Livermore and a bunch of Clancy fans, and rode north then west with them through country where Clancy encountered the worst roads of the whole journey. Today, they could not have been better, as under blue skies, we rode with kindred spirits across a country made for road trips, glorying in the unfettered freedom that only motorcycles can offer.

It reminded me, yet again, of why I go on these epic bike adventures, such as from Delhi to Belfast on an Enfield, Route 66 on a Harley, and Chile to Alaska then around Australia on Triumphs.

You see, in my dreams, I am still a boy on a bike. Because when I was a boy, every morning was an adventure and a new beginning, but when we grow older, a little of us dies every night: killed by what ifs and if onlys, by mortgages and bills, dry rot and rising damp. And buried under the weight of all the possessions we gather around us, thinking that they define what we are. When we travel, though, we are children again. And when we travel by motorcycle, we have nothing to think of when we wake but throwing a few belongings into our panniers and riding off down the road, unencumbered by regrets and concerns.

On a motorcycle, every day is still an adventure and a new beginning. On a motorcycle, I am still a boy on a bike. And as I rode across the USA with the boots of Carl Stearns Clancy in my panniers, a boy who was a little proud that he had thought how wonderful it would be to recreate Clancy’s journey on its centenary.

Our destination was New York, but not before we had visited that National Motorcycle Museum in Iowa, where Clancy’s boots rest today along with his dairies, photos and pith helmet, beside the only original 1912 Henderson left in the world. As I stood there looking at it, much as I had marvelled at Clancy’s courage in making the journey we had followed, I now marvelled even more to see what he had done it on. To contemplate it was the act of a madman, and to complete it the act of a hero.

Geoff Hill is a critically acclaimed and award-winning author, journalist and travel writer from Belfast (and one of the nicest and funniest blokes you could ever meet). We thoroughly recommend his book In Clancy’s Boots. It’s a brilliant account of his recreation ride of Clancy’s epic journey.

Check it out on Amazon in paperback or Kindle. Liked this story on Carl Stearns Clancy or have any questions? Awesome! Leave us a comment below.