Over one hundred years ago, brave men and women loaded up their motorcycles and rode off into the unknown. And back then, it really was the unknown… They were pioneers and true explorers – the first adventure motorcycle travellers. 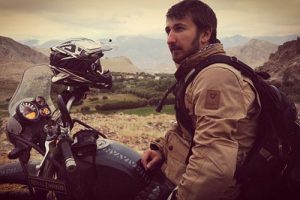 Over 100 years ago, a 22-year-old climbed aboard a 1912 Henderson motorcycle, pulled down his flat cap and left Dublin to ride round the world and become the first adventure motorcycle rider.

Motorcycle travel was completely unheard-of. Forget luxuries like travel insurance, GPS, petrol stations and the internet. He was on his own. The first of his kind. Maps were greyed out with unchartered lands, some countries didn’t even have petrol let alone petrol stations or repair shops and inter-what?

Today, an adventure rider’s biggest worry is often their next Instagram post, back then they had revolvers tucked in their belts and fought off bandits. It was a different world and these dogged and brave few were the first to discover it. These are the tales of pioneers. The first men and women to traverse the globe on two-wheels, paving the way for the rest of us.

The First Person to Motorcycle Round the World

1913: Carl Stearns Clancy circumnavigates the globe on a 1912 Henderson Four

Imagine sitting on a motorcycle resembling a steam engine, in a suit and tie and pointing your front wheel towards Africa. You’ve got 18,000 miles ahead of you through Europe, Africa, Asia and America. No resources, no help and no clue what lies ahead. You are the first to do this in history. Oh, and it’s 1913, one year before World War I. Hairdryers, plasters, machine guns and insulin hadn’t even been invented yet but you’re about to set off on a puttering two-wheeled contraption through countries without roads that haven’t even seen a motorcycle before.

The bike was a 934cc 1912 Henderson Four with one gear, no front brake, 7bhp and advertised as the fastest bike in the world at the time. So, it would have been like setting off on the equivalent of a Kawasaki H2R spaceship. Carl Stearns Clancy, at 22 years old, set off anyway.

From Dublin, Clancy rode south through Europe to Tunisia. He hit his top speed of 65mph in Algeria, only having to let of the gas because his eyes became too watery. Then it was east to India and Sri Lanka and on to Malaysia, Singapore, Hong Kong, and Shanghai. He bought a fighter pilot’s helmet in Japan, shipped the bike to Francisco and rode home to New York. The epic 10-month journey cemented Clancy’s name as the original motorcycle adventurer and the first person to ride round-the-world.

READ MORE: The First Round the World Motorcycle Ride

The First Women to Cross the American Continent on Solo Motorcycles

America was about to enter WW1, women weren’t allowed to vote and sisters Augusta and Adeline Van Buren wanted to serve their country as military dispatch riders – a role strictly reserved for men only. But that wasn’t good enough for the Van Buren sisters. They were determined to prove that women could serve just as well as men, so they rode their 1915 1000cc Indian motorcycles 5,500 miles in 60 days from New York to Tijuana, Mexico… and it didn’t go down well.

They were arrested numerous times for wearing men’s clothing. The press went mad, national papers accused them of using the trip as an ‘excuse to escape their roles as housewives’ and ‘display their feminine contours in nifty leather uniforms’.

Not only did they have to battle the elements, a complete lack of roads, thick muddy swamps and keep their now ancient machinery ticking over, they also had to face police who kept trying to arrest them for being female on a motorcycle.

They ignored the misogynism and pushed on anyway. The Van Burens battled serious off-road routes, severe weather, got lost in the desert and ran out of water. But they persevered and became the first women to ride solo bikes across the continent and the first women to reach the 14,109 feet summit of Pikes Peak by any motor vehicle.

Unfortunately, the sisters didn’t get their wish. The military refused their applications and motorcycle magazines only reported on the bikes, ignoring their efforts. But the Van Buren sisters’ efforts weren’t in vain. They accomplished an extraordinary feat, inspired women the world over and became true pioneers.

MORE INFO: Visit vanburensisters.com for more on their incredible adventures.

In 1932, a 23-year-old Robert Edison Fulton Jr. had graduated university in Vienna and stopped off in London on his way home to America for a friend’s dinner party. While there, a young woman asked him if he was sailing home soon. His reply (probably to impress her) was, “No, I’m going around the world on a motorcycle.” He had no intention of it and later said in his book that the off-the-cuff statement even startled himself. But, sat opposite him was the owner of Douglas Motorcycles, who immediately loved the idea and offered up a free bike.

Fulton’s bluff was called, but he took up the offer without hesitation and set to work immediately. He gathered whatever maps he could find and plotted a rough route. The 1930 Douglas Twin ‘adventure bike’ was quickly kitted out with a second fuel tank (350-mile range total), windshield and common car tyres were fitted to make repairs and finding a replacement easier on the road.

Two weeks after the dinner party and he was sat on his bike riding towards Dover, worried only that his parents might find out what he was doing. Armed with knee high socks and boots with a pith helmet and .32 revolver, Robert Edison Fulton Jr left London to ride 25,000 miles over 18 months to Tokyo.

He rode through a world still under Colonial rule, crossed 500 miles of scorching Syrian desert, spent a night in a Turkish jail, escaped from Iraqi bandits, was shot at by tribesmen in the Khyber Pass, was a guest of the Rajah of India and recorded a film of the journey using 40,000 feet of motion picture film that he carried with him.

Be careful what you say to impress people at dinner parties, it could end up changing your life.

MORE INFO: Have a read of Fulton’s book One Man Caravan and watch the excellent Twice Upon a Caravan film.

The First Motorcyclists to Ride from London to Cape Town

While 1930s wives were told to stay at home and prepare dinner, Theresa Wallach and Florence Blenkiron were battling through the Sahara Desert on their way to South Africa. After eight months and 13,500 miles, they became the first motorcyclists (male or female) to cross the Sahara and the first to make the journey from London to Cape Town.

They weren’t following in anyone’s footsteps and had no proper maps or backup. It was just them, one 1935 Panther Model 100 600cc motorcycle with a Watsonian sidecar and trailer. They faced sand storms, dangerous animals, treacherous off-roading, tribes, lions, snakes and gorillas, the French Foreign Legion and total engine failures, which they rebuilt single-handedly.

Theressa Wallach wasn’t only an intrepid explorer, she was a successful motorcycle racer and won the coveted British Motorcycle Racing Club Gold Star for lapping the classic Brooklands race circuit on a 350cc Norton at over 100mph. She was an engineer, motorcycle instructor and mechanic. When the Second World War broke out, Theresa became the first female dispatch rider in the British Army. After the war, Theresa headed to America for a 32,000-mile, two-and-a-half-year motorcycle tour through the USA, Canada and Mexico. All unheard-of adventures for women at the time.

Theresa Wallach once said, “Motorcycling is a tool with which you can accomplish something meaningful in your life. It is an art.” And for all these adventure motorcycling pioneers, and the many more who braved the world on two wheels since, she’s not wrong.

1915: Effie and her mum ride from New York to San Francisco in a sidecar outfit

Effie Hotchkiss put her mum, Avis, in a Harley-Davidson sidecar outfit and rode 9,000 miles from New York to San Francisco and back in 1915. They became the first women to ride across the USA and an inspiration to future generations – especially considering that in 1915 women weren’t allowed to vote and it was illegal to wear men’s clothing.

Effie was only 26-years-old at the time and Avis was 52, but Effie dreamed of seeing the country and wanted to be the first woman to complete the trip. The duo used a Harley-Davidson 11F 3-speed equipped with a sidecar, which Effie carried tools for and performed her own repairs, even stuffing a rolled up blanket in the tyre when they ran out of inner tubes.

The entire trip from Brooklyn to San Francisco and back took three months while averaging around 150 miles a day, which is impressive considering the road conditions and lack of infrastructure. They completed their trip at an incredibly difficult time for women in America, but did it anyway and became pioneers. 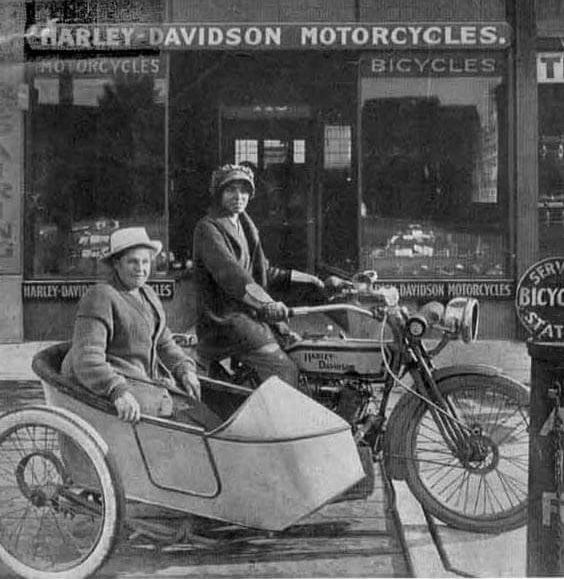 The First African American Woman to Ride Across the USA

By WWII the rules began to change and some women were allowed to ride as despatch riders. The most notable being Bessie Stringfield, who became the first black woman to cross the USA on a motorcycle. She rode through the lower 48 states, but was often refused accommodation, told she wasn’t allowed to ride, denied prize money after winning flat track races and was knocked off her motorbike, all because of the colour of her skin. She didn’t let any of that stop her though and later became known as the Motorcycle Queen of Miami. The First Indians to Motorcycle Round the World 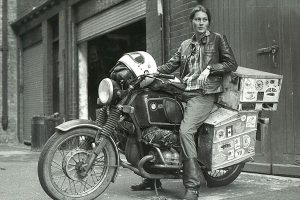 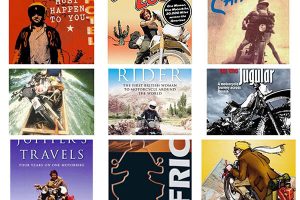 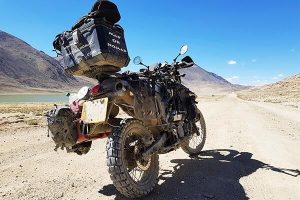 How to Motorcycle Round the World

We’d love to hear from you. Please leave your comments below!