This guide explains what happened when we crossed the border from Thailand to Malaysia with a two-year expired temporary import. If your motorcycle TIP for Thailand has expired and you’re worried about it, have a read of this article first.

Dealing with an Expired Temporary Import in Thailand

Overstaying a temporary import (TIP) in any country is never recommended and will often be met with fines. Thailand is no different and it is not something we would ever suggest doing. However, it does happen.

We were in Thailand when Covid hit and we had to hunker down as the world went into lockdown. We waited for five months for things to get better before realising we didn’t have a choice but to leave our bike in Thailand and fly home to the UK, put our round the world trip on pause and wait it out. Two years passed by before we flew back to collect our bike. By then, our TIP was well and truly expired… here’s what happened.

Extending your motorcycle TIP in Thailand

You will find more information on entering Thailand with a TIP in our Motorcycle Travel Guide: Thailand. The way it works though, is that your TIP is valid for as long as your visa is. If you want to extend your stay in Thailand, you must first extend your visa and then you can visit any Thai customs house (there are many all over the country, you can find them on iOverlander or with a quick Google search). Take your passport with extended visa and TIP and you’ll get an extension stamp.

Leaving our motorcycle in Thailand

We did extend our TIP five times while waiting for things to calm down. Quite a few fellow travellers we know shipped their bikes and vans home once we all realised it wasn’t going to get better any time soon. This meant their vehicles didn’t break any rules and left before their TIPs expired.

But we wanted to come back to our bike and continue the trip. Shipping home would mean having to ship back – an expense we couldn’t afford.

We visited a customs house and asked what the fine would be if we didn’t continue to extend and flew home and were told that the bike would be confiscated and we could face a million baht fine. We chose not to believe this as on the TIP it clearly states a maximum fine of 10,000THB. What we didn’t know is how long that would be valid for before it increased.

But, we were assured by a number of people that it wouldn’t go over that amount.

David Goodchild who runs PloddStop in Pattaya (an oasis for overlanders) said that he had stored a number of vehicles over the years and all only paid the 10K fee on leaving.

We took the risk, left our motorcycle with a very good friend in Pran Buri and flew home.

Exiting Thailand with an expired TIP

A friend of ours who left his bike in Thailand the same time we did, flew back to collect and ride out of the country one month before we did (also leaving his bike for two years). He was asked for his TM2 forms at the border (which you receive upon entering) and they charged him 10,000THB for his two-year expired TIP.

One month later and it was our turn. However, the customs official said that if we could show that we left Thailand before our extended TIP expired, then he would only charge us 1,000THB. If not then it would be 10,000THB.

We extended our TIP for the fifth time and made the decision to fly home a few weeks later. So, I could show the passport stamp for when we left and it was dated before the last TIP extension expired.

Two years of worrying about fines only to receive a 1,000THB (£25) fine. We also did not need to show our TM2 forms, however, I do believe they are important and often asked for.

The best Thailand borders to cross with an expired TIP

We were told that there are specific borders we should cross as they’d be more lenient (we would still receive the 10K fine at these borders, so I’m not sure what this leniency means). All these borders are far out of the way. They’re perhaps more important for travellers looking to enter Thailand and avoid the new rules on compulsory guides. We crossed at a major border and it all went very smoothly.

Make sure you get your receipt for the fine paid and take a photo of it just in case.

It’s easy to extend your TIP in Thailand so there shouldn’t be a reason to overstay, but extenuating circumstances do happen. And if they do, it looks like you’re pretty safe overstaying your TIP so long as you’re prepared to pay the fine. It doesn’t look like it will go over 10KTHB. However, things can and do always change, so it’s always best to not take the risk in the first place. The most important thing in Thailand is to not overstay your visa – now that’s a whole other world of trouble!

Read more on Motorcycle Travel in Thailand and Southeast Asia

Thanks for checking out this Overstaying Your Motorcycle TIP in Thailand Guide. We hope you enjoyed it! Here’s a few more articles on motorcycling in Southeast Asia that we recommend you read next. 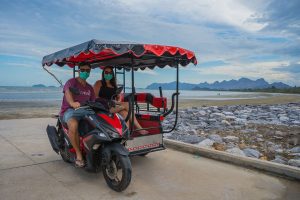 Carrying on with Covid 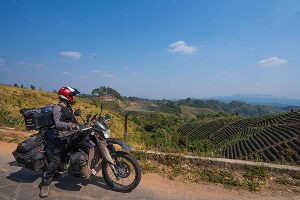 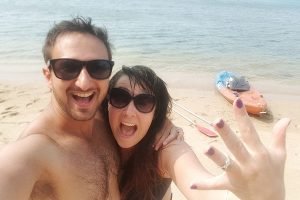 Are you planning a motorcycle trip to Thailand or Southeast Asia? Or do you have any questions or tips to share? Let us know in the comments below.