Welcome to the unspoilt paradise of British Colombia. Mountains, lakes, bears and forest fires… what more could you want from a Canadian Rockies motorcycle adventure? By Andy and Alissa

A Motorcycle Tour through Canada

The BMW R1200GS hums calmly, pottering on without a worry in the world. It has made the same journey before while we, on the other hand, are new and nervous. We haven’t seen another person in hours. We’re riding slowly, on dusty gravel roads, in jeans and t-shirts, somewhere in the Canadian Rockies with nothing more than a pathetic little stick for protection and I can’t keep my eyes on the road. I can’t help it; they’re darting frantically, scanning the thick forest for bears. The last 20 people we’ve met warned us about bears on this trail but offered no advice for when we come face to face with one. What happens if we turn a corner and find one in our path? It’s too tight to perform a U-turn and we’re not about to play chicken with a grizzly. All we can do to preoccupy our minds is immerse ourselves in the sights and enjoy the most beautiful place we’ve ridden in our lives.

Some 1000 miles south of where we are, the world and its dog are flying in to the US to ride the same old, virtually worn out cliché that is Route 66. Every Harley rider both sides of the pond has been there and done that. This, however, is fresh beauty; this is where you need to be for the greatest riding week of your life and have a real adventure in the Rockies with a GS, on open roads, with epic backdrops and more wildlife than you can shake a broken twig at.

“You better watch it; there are bears where you’re heading.” I know, I know, so everyone keeps telling us. But we haven’t seen any since leaving Vancouver and it’s now day four. I’m so worked up about bears that anything I see moving instantly transforms itself into a grizzly. I’ve yanked the brakes for wild boar, deer and even a squirrel, much to Alissa’s amusement. But it doesn’t matter; that raw, untainted nature is one of Canada’s most mesmerising features. And there is no better way to experience it than on a motorcycle. We swapped some money for a 2010 BMW R1200GS in Vancouver, stashed a map in a pocket, waterproof throwovers, shorts, t-shirt, towel and toothbrushes in a pannier and set-off for Mount Robson, the highest mountain in the Rockies. Easy as that. Now here we are, at a truck stop in the middle of nowhere, 500 miles from Vancouver, talking to a trucker about bears and cafés.

“Café? You’re in the boon dogs out here son,” he chuckled. “Just keep on heading north!” he shouted from his truck as he rammed it into gear and chugged away, plumes of black smoke in tow. No lattes for us then. We’ve got enough sandwiches and fuel to last the day, so Alissa double checks the map one more time and I hang a left onto the gravel pathway between the trees.

The track carves through the forest and runs parallel with an endless river. I start to race alongside the water as it slaps the rocks and weaves its way through the woodland. We both stand tall on the pegs, flick the GS to ‘enduro’ mode and pick up the pace. The big BMW makes light work of the trail as it purrs alongside the frosty blue water. Frothy white foam bubbles over rocks and the surface sparkles like a thousand camera flashes. It’s captivating and we ride alongside for hours, chasing the rapids, glancing at the eagles flying overhead. It doesn’t feel real. The road network cuts through places we shouldn’t really be. It’s too natural, too idyllic. It’s a place only great explorers should be able to reach, but instead of lusting over their pictures in National Geographic, you can rent a bike and ride through an otherwise unreachable land for a few hundred quid. After a full day in the dust, the trail slowly returns to Tarmac and we sit back down, flick the riding mode back to ‘comfort’ and await a new, ever-changing backdrop.

Riding into the sky

Since leaving Vancouver, the road has been a continuous incline to the sky. I keep a steady throttle and raise my left hand, the clouds are so close it feels like I can tickle their bellies. It’s now day five and we’re at the start of the Icefields Parkway, one of Canada’s greatest national treasures. The 144-mile stretch of road links Banff to Jasper and cuts straight through the Rockies, taking in some of the most spectacular scenery in North America. In winter the road is whitewashed with snow, while in the height of summer the ancient glaciers melt and the ice-cold water runs into rivers alongside the road. We’re only a little way in when the highway starts to empty and everyone seems to be heading in the other direction with cars and bikes flashing and waving at us. I double check I’m on the right side of the road and keep going until we finally realise what they’re escaping from. Humongous plumes of brown and yellow smoke bellow from the trees and helicopter blades thwack through the air as buckets of water are released from long pipes onto a raging forest fire

The Icefields Parkway is where everyone says we’ll see the bears, We’ve been looking forward to it since Gatwick and are only 19 miles in, so we tuck behind the screen, twist the throttle wide open and ride hard until we can only see the smoke in the mirrors. An hour later and the police closed the entrance, so we were lucky to make it through. I thought the bears would be hard to spot, but casually strolling just four metres from the highway is a black bear with two cubs in tow. I cut the engine, we slowly get off the bike and gently follow the bear, not daring to step on the grass – as if the Tarmac will protect us. Four metres, three, two and we’re getting closer. The bears are chewing on shrubs and pretending we’re not there. We’re transfixed until a car brakes harshly. “You guys are idiots for getting that close!” a woman shrieks before wheelspinning away. The bear looks at us as if to say “she has a point.” Embarrassed, we retreat slowly and ride off with the biggest smiles. Another 20 miles down the road and we see a brown grizzly crashing through the bushes. No way were we getting anywhere near that one.

As we begin the ride back to Vancouver, the terrain changes every 100 miles as the road wriggles through the Rockies into monumental national parks, up and over snow-capped passes, into ranch towns, through 42°C deserts and through canyons and gorges. The Sea to Sky Highway from Whistler to Vancouver is a cleverly crafted ribbon of Tarmac that flows along the coast, wrapping around the mountains. Every section seems to be shaped especially for bikes as they run adjacent to crystal waterfalls, turquoise lakes and more natural beauty than you can imagine. Pack a rucksack, take a good camera and book a cheap last-minute flight. This is where you need to be.

Motorcycle touring in Canada is out of this world, and really easy to do! We rented a BMW GS for a two-week, 1,600-mile ride through the Rockies. If you’re interested in doing a similar trip, then check out our dedicated Canada riding guides. These guides detail the exact day-by-day route we took, where to rent, what you need to know and you’ll also find a downloadable Google map. 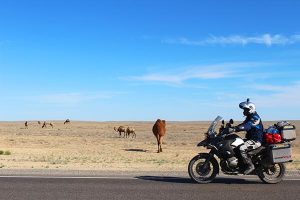 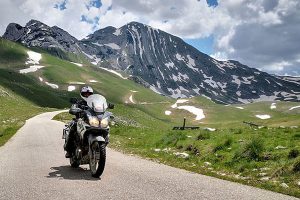 We hope you enjoyed this article on motorcycle touring in Canada. Please leave any comments below, we’d love to hear from you!