Welcome to this week’s Thoughts from the Road Column. Here’s Mike Taylor on old vs new bikes… 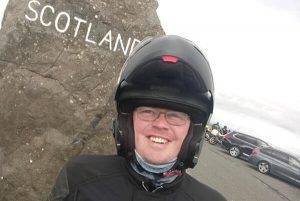 Mike’s seriously knowledgeable on Scotland and has been running tours there for the last 15 years. He also knows his way round Europe, goes on holiday too much, is a beer enthusiast and hordes motorcycles.

Mike runs a motorcycle touring company in Scotland. If you fancy a guided tour or need some help planning the perfect route, get in touch with him at passingplacestours.com

And you can find more of Mike’s articles on Mad or Nomad on the Contributor page.

I’m in a very lucky position. I’ve managed to buy two brand new bikes in my lifetime and I currently have four bikes in my shed. Getting to ride many different bikes, old and new, has shown me a few things…

Modern bikes are the safest bikes have ever been. Loaded with the safety nets of cornering ABS and traction control, the digital Guardian Angel looks over you on every ride. Modern brakes are phenomenal, even the stuff that is described as below par hauls you up miles before some old cable operated drum. Electronically controlled suspension means you can go from sportsbike stiffness to cruiser comfort in the touch of a button while modern fuel injection sips the fuel regardless of altitude and environment while keeping things as clean as possible.

Bikes got ugly. Honestly, bike designers must take way more drugs than I do to come up with some of the horrendous designs that they do. What’s with all the angles and pipes everywhere? Haven’t they ever seen a Kawasaki Z900 (no, the original one) or a Ducati 916? My 1150GS was an ugly stepsister to some older Beemers, but it now looks like Scarlett Johansson next to the hideous monstrosities roaming the roads.

Build-quality really is not what it used to be. I use a 31 year old BMW K75 as my winter bike. While it won’t set your world on fire as far as outright riding experience goes, the seemingly nuclear heated grips certainly will and it has stood up to the Scottish salty winter roads quite well. Compare this to some of the more modern bikes I have owned and it’s night and day. The paint on my 1200 GSA frame was wearing through before I got rid of it and some of the Africa Twins that I have seen look like they’ve been kept in the sea after a winter’s use. So, mine stays in the shed after the salt goes down in winter.

This may all sound like some old halfwit reminiscing and I suppose it is, but I’m not alone. The second-hand bike market shows that, so you’re going to have to pay if you want a well-made bike that’s full of character and satisfying to ride. If you’ve not ridden an old bike and you get a chance – take it. Just keep in mind, there are no safety nets apart from your right hand on some of the old stuff.

What do you think? Do you agree? Would you only ride a new bike or can you not be tempted away from your old steed?

Thoughts from the Road is a weekly community discussion column for motorcycle travellers. Feel free to share your views here.