From sleepy islands in the south to jagged karst mountains in the north, we fell in love with Laos and everything in between… 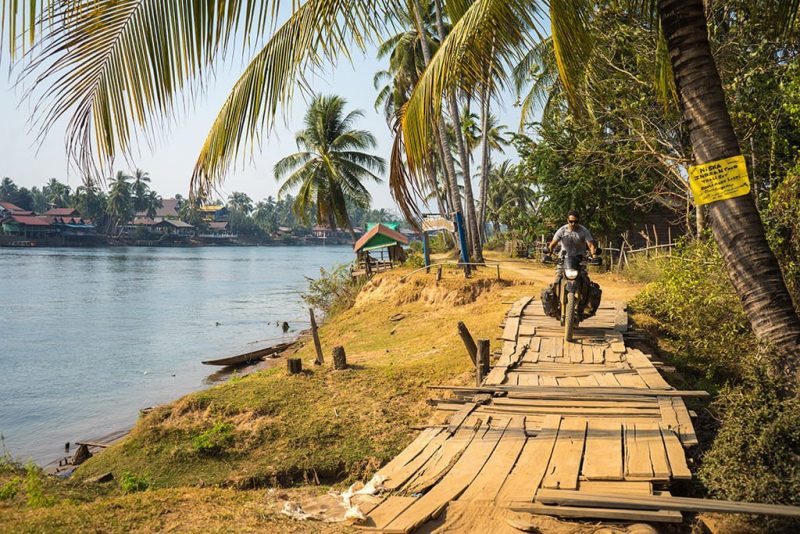 The rickety wooden bridge creaked as the XT rolled over it and onto the bobbing boat. We paid the boatman a few pounds and squinted as river water splashed our faces on the way to Laos’ 4,000 Islands.

Gold sand filled the road, palm trees swayed and the sun browned our arms as we rode around the island looking for a hut. A teak wooden cabin with a couple of lazy hammocks on its porch and overlooking the emerald green water for £8? Sure!

Fishermen cast their nets from skinny boats in the early morning. A few hours later and water buffalo waded through. By midday it was the kids turn to paddle out, diving off their boat in search of treasure.

A few days turned into a week. We’re completely relaxed here unlike in Cambodia where we developed an addiction to searching out hidden temples every day. Life in Laos is laid back… and now so are we.

It lasted two days before we were off-roading through the heart of the island, searching for waterfalls, abandoned colonial French railways and Irrawaddy river dolphins. We can no longer help ourselves. Staying still is hard work!

We eventually started to move towards central Laos. We heard about the Thakek Loop 300 miles north (supposedly great for riding) and headed straight for it. It took us a few days of long straight riding because, like in Cambodia, the roads are just too risky. The roadsides are lined by wooden huts, shacks and houses. Instead of living off the main road, people here have their houses alongside it. Most people own livestock and so cows, chickens, pigs, dogs and cats are constantly running into the road. Same goes for children.

We rode the Thakek Loop, but the real highlight for us with the Kong Lor Cave (means beauty in the dark). The Nam Him Bun river cuts its way through the entirety of the limestone mountain, and so to explore the cave you need to hire a boatman.

The cave is over four miles long (you go in one end and come out the other at a remote village), over 100 metres high and around 100 metres wide in places too and fully stocked with bats.

At the beginning the boatman lets you jump off for a bit and explore a section of stalagmites by foot, then it’s back in the boat for four miles of cold, pitch black darkness…

We ended up at a resort not far from the cave, you know the fancy type where you get ice cold water with cucumber on arrival? Not bad for £8 a night, but we were spoiling ourselves. We rented a kayak and paddled through a spooky blue lagoon. There was no one there, pure silence other than insects and the way the forest sank into the water made it feel haunted. The staff explained that we couldn’t get our bodies in at certain parts as it was the village’s source of drinking water.

Like with Cambodian temples, we started to get a little obsessed with caves and lagoons. We worked our way to Vang Vieng to search out more of them and spend our days traipsing through dark caverns and dipping in crystal blue waters.

An eccentric priest-shaman called Luang Pu (meaning Venerable Grandfather) Bunleua Sulilat created the statues and park. He was a well respected mystic, myth-maker and spiritual cult leader. He believed in blending Buddhism and Hinduism and built these fantastical gods, humans, demons and animals.

It’s said he got the inspiration to design and build these statues (as he had no prior art or sculpting knowledge) after he fell in a cave when he was young and had mystical visions after going so long without food. It was also in this cave that he met his mentor, a hermit named Keoku (for which he built another park in Thailand and named it after him). Cave or no cave… these are impressive.

North to the Mountains

The Thakek Loop was nice, but nothing compared to the ride from Vang Vieng to Luang Prabang. We always feel most at home in the mountains and the Laos’ north didn’t disappoint. Deep green karst burst out of the ground and line the horizon, behind them a blanket of blue and grey mist. Roads twirl up and around Laos’ northern mountain range, carving their way through remote villages.

The riding here is spectacular and so is Luang Prabang.

It’s got to be Laos’ most visited city and it’s easy to see why. Delicious coffee, sweet carrot cakes, a bustling night market, copious tasty street food and the chilled out vibe made us stay longer. One night, as we were riding around looking for a restaurant, an English guy on a scooter spotted our GB plate, pulled up beside us and asked to meet for coffee the next morning. Chris visited Luang Prabang years ago for a holiday and just never left. Instead, he opened an off-road bike tour company and spends his days riding mountain trails.

It makes us wonder if one day we’ll ride through somewhere and love it so much we never leave. We’ve come close – very close, and Laos is definitely one of those places.

We’re surprised at just how much we love Laos. The people have been so incredibly friendly and are always smiling, despite the country’s extremely difficult past (click the tab below if you’re interested in its history).

Laos is the most bombed nation in the world after the US dropped over two million tonnes of cluster bombs on it from ’64-’73  during its ‘Secret War’ to disrupt supply lines to the Vietnamese.

And it has killed one-tenth of Laos’ population, turned a quarter of the country into refugees. But the problem still continues as 30% of these bombs failed to detonate and still kill and maim people in Laos today (20,000 since the war ended). Removing these bombs is still a huge and ongoing project in Laos.

Interestingly, Obama was the first sitting US President to visit the country and pledged $90 million to help remove unexploded ordinance.

Laos still has a raw, rural and rustic feel to it. It’s not developed in the same way as its Thai neighbour. Going even the slightest bit off-piste feels like discovering new lands. We fell in love with Laos, it took us by surprise, is now one of our top five favourite countries and we’re definitely coming back.

Thanks for checking out our Laos Blog post. We hope you enjoyed it! Here’s a few more articles on motorcycling in Laos that we recommend you read next. 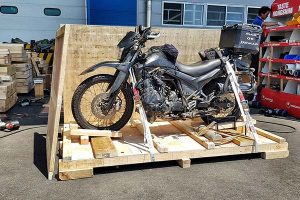 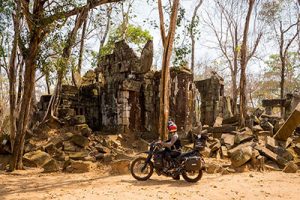 Let us know what you think of this blog post on motorcycle travel in Laos in the comments below. We’d love to hear from you!