You’re riding down the road in the middle of nowhere when a policeman jumps out from behind a bush, says you were speeding and demands £100. What do you do? Here’s how to handle bribes on your motorcycle travels….

Plenty of people in the pub, mates and keyboard warriors will all say that they’d tell him where to stick it. But it’s very different when you’re actually in the situation – alone.

We’ve seen people react in so many different ways to this issue, from super experienced travellers clamming up and lost for words to quiet, gentle travellers who blew up in peoples’ faces.

Everyone reacts and handles situations differently and every situation is different. There’s no one right or wrong way or a definitive answer. But there are tried and tested experiences, which work most of the time.

So, we’ve written this guide, based on our experiences, to help show you how we’ve dealt with tough problems and hopefully offer some advice that will ease difficult situations.

Before we get into it though, we’d like to say that if at all possible, don’t pay a bribe. It only encourages the corrupt official to do the same thing to the next traveller. However, if you feel for a second that you might be in danger and it could take a nasty turn for the worse, then remember that it’s only money. Pay up, get out of there and report them.

Think of it as a war of attrition. It’s important to smile (pull an angry face and they’ll know they’ve got you). Smile and you’re a no-threat, easy going person. Mix that with playing dumb and after a while you’ll become a smiley annoying person.

90% of the time this will work. You don’t speak their language, don’t understand what they’re trying to show you on Google Translate and by the end of it you don’t even speak English. The idea is to wear them down until they’re just so bored of you that they let you go. Of course, this will only work if you are not in the wrong. If you were actually speeding or doing an illegal activity then expect to pay up!

Remember, they’re there to make money, every minute they waste with you they could be trying their luck with a local and they’ll want to move on as quickly as possible.

You need to be prepared to call their bluff. If they say they’ve got all day then be prepared to sit it out. I once avoided a bribe when I was told I couldn’t leave by setting up my stove in front of the police and making coffee for myself. I offered them a cup each and instantly all was forgotten.

It’s a game changer if the official gets your passport. Never give it up. Always carry a laminated copy of the passport page with your photograph on. If they ask for the original then it’s at the embassy (the dreaded word they hate – more on that in a sec). Same goes for your driver’s licence. If they get your passport, they’ll probably refuse to return it unless you slip them a large bill.

What’s in your wallet?

Opening your wallet in front of them is also a very big no no. Assuming you’re opening your wallet because you’ve decided to pay up, it’s always a bad idea for them to see how much money you have – they’ll want more. A good trick is to keep a fake wallet with you. Keep very, very small bills in there, a couple of old bank cards that no longer work and a few receipts for authenticity.

This also works well when travelling in not-so-friendly places as a decoy for pickpockets. You can show the official that you literally have no money left and are on the way to the embassy/ out of the country/ to your friend’s house.

Some people go on the aggressive. If you’re going to do this then you’ve got to be prepared to go the distance and straight off the bat. It doesn’t work if you start of nice and then go aggressive – that’ll just make them think that they’ve got you.

It doesn’t mean shouting or being physically aggressive, but they’ll need to know that you’re an immovable force who will not give in, so you can’t change the way you’re handling it throughout the ordeal. This is a tough card to play as you’ve only got the one card for the whole situation. It also helps if you’re a bigger, more intimidating person.

There is a benefit to this situation though, and that’s drawing attention to your situation. Shouting, waving your hands around and telling the public that this man is trying to rob you can lead them to scurrying off sharpish.

Locals can be a help too, if they want to get involved. You can also ask locals (before you’re stopped) what the going rate for bribes is.

If they’re not giving in

Okay, so they’re not giving in and you’re tired of playing dumb. You should then move onto the embassy line. Pull out your phone, take a photo of the guy and just start waffling on about your embassy. Pretend to make a call, write down some random squiggles on a piece of paper, make a caricature of the policeman, write down his number plate and make sure he understands that you’re calling your embassy and reporting him specifically. You can also state that you’re going to find the police station in the local town and report him. Sometimes, just saying ‘embassy’ is enough.

If they’re calling you out for speeding, make sure you demand to see proof. Where’s their speed camera gun?

If you have to pay

Well, it sucks, but if you’re left with no choice then at least haggle. Set a very low price. Often, they are trying their luck massively when they go in with a hard and high price. If they demand 200 USD say you’ll only pay 20 and then play hard ball on that. But remember, the second you offer up a price, they will know they have you and all smiling and playing dumb is out of the window. Stick to your low price and repeat the smiling and playing dumb scenario.

They’re not all bad

Try not to go into the situation assuming that it’s going to be a bad one. I’ve been pulled over plenty of times, expecting the worse, when they only wanted to check I was okay or tell me politely to slow down. Sometimes the police (in places we’d never have expected it) just wanted to offer us cups of tea and share watermelon.

Most importantly, remember to stay calm, smile, be strong and hold your ground. If you must pay then it’s only money. Your safety is far more important. Good luck!

Thanks for checking out this How to Deal with Bribes and Corrupt Police Guide. We hope you found it helpful! Here’s a few more articles on motorcycle travel that we recommend you read next. 5 Essential Tips for Communicating While Travelling 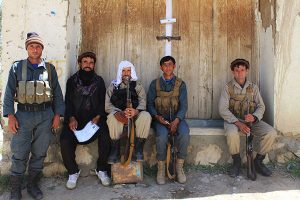 4 thoughts on “How to Deal With Bribes While Travelling”