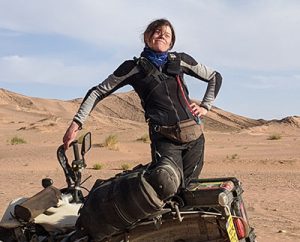 Head to any adventure riding event in the UK and chances are you’ll see any number of well-worn Magadans owned by well-worn adventurers with tales of crossing continents. Why are these bags so popular with serious overlanders but consistently overshadowed by other brands in the casual ADV circuit?

Adventure Spec is a UK company founded by Chris Colling and Dave Lomax in 2007 that produces riding gear and bike accessories for offroad riding under the motto “Light is Right”.

The Adventure Spec Magadans were developed and tested in conjunction with Walter Colebatch, of Sibersky Extreme fame, with the challenge ‘How do I create a set of soft luggage that is properly positioned, lockable, strong, simple and easy to maintain on the road whilst being waterproof with the look of classic luggage?’

The result is a set of 35l bags with an outer bag of Kevlar/Twaron fabric sandwiched between 1000D Cordura layers. This combination is abrasion resistant and claims to be slashproof – although I’m not aware of anyone that’s actually tried to knife their bags to test the veracity of this claim. A reflective tape is sewn around the outer bag for extra visibility at night and the removable inner bag is a heavy PVC waterproof seam-taped dry bag.

The bags are connected to each other with a pair of large velcro throwover straps that go across the seat. Rather than a single layer, one bag has two straps and the other one which is sandwiched between the two.

The Magadans are designed to be simple, so this will be a rather short list.

The main (and really only) feature of the Magadans is a set of pockets. In the front are two bottle pockets that are sized to hold 1.5L plastic water bottles found anywhere in the world, 1 liter fuel bottles or vacuum flasks, or even (importantly for any overlander!) wine bottles.

In the rear of the bags are large pockets with velcro flaps and small drainage holes in the bottom that are great for messy or wet items – waterproofs, 1 liter bottles of oil, chain lube, or dirty rags. These pockets can also be used for things you need frequent access to (I’ve started stashing a selfie stick and mini tripod in there).

Most of the weight of the bags is placed on the throwover straps, which can be adjusted depending on your seat and rack width. From there, they are additionally secured to a luggage rack with mounting straps.

Somewhat unusually, Magadans do not come with these mounting straps. (Adventure Spec recommends Kriega Cam Straps, but similar options are widely available at almost any hardware store worldwide). These straps are positioned both horizontally and (optionally for more security) vertically on each bag. The horizontal straps are woven through a slot between the external pockets and the bag itself through small openings, and then looped around the bag and the rack. Vertical straps are run through riveted loops and again looped around the bag and the rack.

A rack is required for the Magadan bags to keep them in place. Adventure Spec recommends any standard square rack, but I successfully mounted the bags on my DRZ with low-profile PM Racks. You might struggle to get the bags securely fastened with minimalist heatshield-style racks due to the need for the horizontal straps to fasten on both sides of the bag. If you’re not sure, best to mail Adventure Spec to check.

The system does take a bit of getting used to and it was slow going getting the bags on at first, but with practice it becomes faster. I typically leave the straps partially attached to the bags if I’m removing the bags from the bike, and now it takes me less than 3 minutes to strap them back onto the bike. I might be able to get it even faster if I replaced my cam straps with buckle straps.

The advantage of this odd system is threefold. One, the straps arranged like this hold the bags on very well and you will never have a problem with your bags shifting even when riding off-road. Secondly, one can replace the vertically mounted strap with Steelcore lockable straps. Thirdly, in my experience sewn-on mounting straps are the first thing to break in a fall and can be difficult to fix properly. Separate straps wrapped around the bag are less likely to tear off, and if they do break are cheap and easy to replace.

I bought my Magadans in 2019 for £312, but the price was increased this year to £416. This does not include mounting straps. Adventure Spec recommends Kriega Cam Straps (£15 for a pair, and two pairs are needed), but nearly any 1 inch wide/1.5m long luggage or tie down straps will do and can be bought for as little as £2. This price point makes the Magadans an affordable option compared to top end bags like Mosko Moto Backcountry (£600), Lone Rider (£871), or Giant Loop RTW (£500). However; newly-launched Turkana Gear HippoHips bags are of a similar design with throwover straps and a removable inner bag but with a price point of €394 (£79 less than Magadans) are a competitive alternative. If you live in Australia, Steel Pony bags are also a cheap option of similar design.

Durability and Impressions after 15,000 miles

I’ve now put over 15,000 miles on these bags in often challenging conditions – including hard off-road with a lot of falls, torrential rain, and one low-speed tarmac crash around a wet hairpin in Austria. After the tarmac fall the bags were slightly scuffed and the reflective tape tore in one spot, but has held up well. (Remarkably, a bottle of wine I was carrying survived intact).

The inner bags have remained waterproof, although I have a few pinprick holes from Moroccan thorns that I intended to seal up (any sort of flexible repair adhesive should do). If they ever do fail, replacements are only £20 through Adventure Spec, or I might try thinner separate dry bags that take up a bit less room.

So far the velcro on the throwover straps has held up well, but I will probably replace it with a buckle at some point in the future because velcro eventually will fail and I rarely detach the bags from each other.

While the inner bags were designed to be removable to take into your tent/hotel at night, I find I don’t bother because it’s a bit difficult to get them in and out when full. I find it much easier to remove the whole system, or leave them locked to the bike. (My tent is too small to fit anything else inside anyway)

I LOVE the lockable straps. I regularly leave the bags locked to the bike overnight and just throw a cover over it – anywhere that’s unsafe enough that someone would seriously try to cut into the locked bags (a difficult task indeed with the kevlar lining) is unsafe enough that they’d just steal the whole bike anyway and I shouldn’t be parking there. While I know that in theory I could use locking straps on almost any other luggage, the purpose-designed riveted loops and kevlar lining gives a lot of extra security and peace of mind that I wouldn’t have otherwise, and in my opinion make the bags at least as secure as hard luggage (that are often bypassable with a flathead screwdriver).

The size of the bags (35l each side) has been perfect for me as a solo RTW traveller. While couples who share camping kit or ultra-minimalists can get away with smaller systems, I find the 70 liters of pannier capacity and a mid sized 30l roll bag is the right amount to pack what I need and no more and still be lightweight. Because the bags are expandable past this point, I can even overstuff for when I need to pack extra food for a longer expedition.

In terms of negatives, it’s a small thing but I’m not a fan of the reflective tape. While it adds great visibility when riding at night, I don’t ride at night anyway and makes it harder to stealth camp. I was discovered once in Morocco while wild camping solo due to the truly blinding reflection from headlights at night in the desert, and I feel very lucky that they left me alone without incident. I will probably pick the thread off and remove it entirely. Those who rarely stealth camp would probably feel differently.

The black canvas does tend to accumulate dirt, oil, and grime. A jet wash will usually clean them up pretty well, but hand washing does little. Mostly I embrace the rugged look.

A slightly larger negative is that it does take a long time to get in and out of the bags – to access anything inside I have to unlock the vertical strap, unclip two buckles, unroll the canvas and pull apart the velcro to get to the inner dry bag, unclip the inner dry bag, then unroll and unvelcro the inner dry bag. I try to keep things I need regular access to in the outer pockets or in my tank bag, but in practice I still find I need stuff inside more often than I wish (particularly at borders where everyone wants a look inside) and it’s an extra annoyance. But, it’s a price that I have to live with, given that to make the bags easier to get into they would have to sacrifice some amount of security, durability, or repairability, and those are three key qualities that I need in a bag.

The Adventure Spec Magadans embody an old school attitude towards adventure luggage that is nowadays nearly gone – that your saddlebags should be bags. They should hold your stuff, keep it dry, last through the toughest conditions, and should they fail, they should be repairable no matter where in the world you are – especially in places where returning a product under warranty is weeks of delay to your journey at best, impossible at worst.

This philosophy of rugged simplicity means that they don’t have a lot of features that characterise other popular luggage systems; there’s no snap on mountings, easy access interiors, accessory attachment points or other convenient extras. Whether Magadans suit your style of travel really depends on your own philosophy. For me, they suit me well and I expect to get many more miles of use out of them. 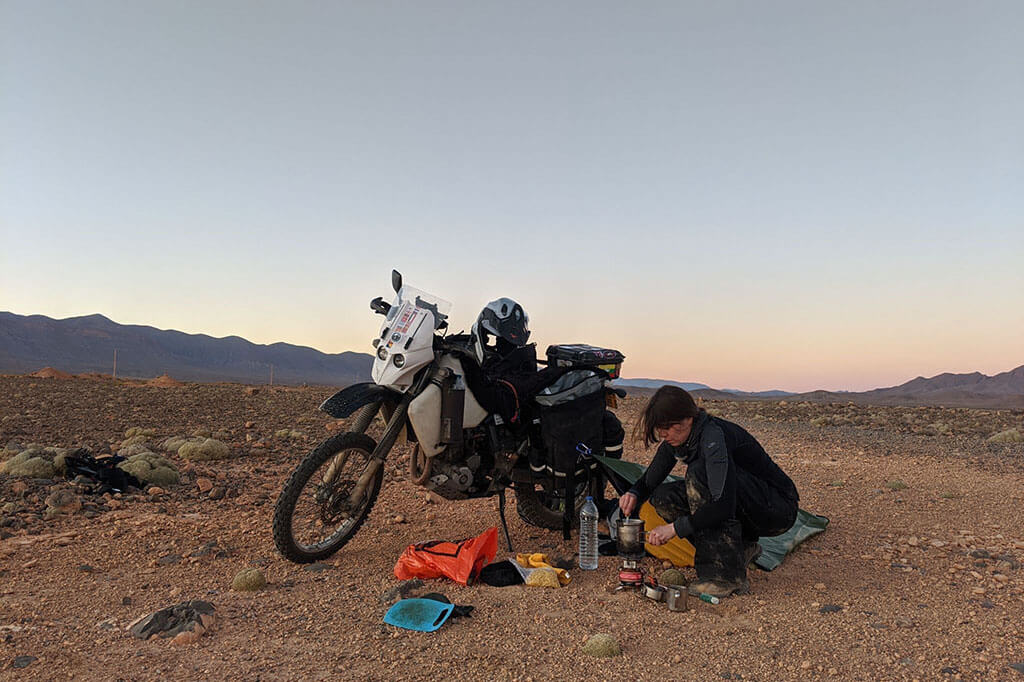 Heather is an avid adventure bike rider and traveller. In 2018 Heather completed a 10-month, 22,000-mile motorcycle journey across Asia from Indonesia back to the UK. Since then Heather set off for an overland trip across Africa to Cape Town, got stuck in Morocco due to Covid border closures, changed plans, toured Europe and is now riding somewhere in America!

Check out Heather’s awesome book!: The Only Way Out is Through

ps. We may receive a small commission, at absolutely no cost to you, if you purchase any products using the links on this page. We’re not sponsored by anyone, are completely impartial and don’t run ads. So this helps us keep the site running. Thank you for your support.

Thanks for checking out our Adventure Spec Magadan Panniers Review. We hope you enjoyed it! Here’s a few more articles on motorcycle luggage that we recommend you read next. 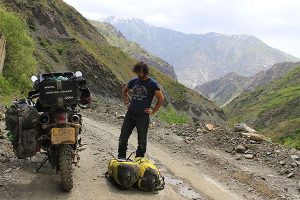 How to Pack for a Motorcycle Adventure

Are you interested in the Adventure Spec Magadan Panniers or do you use them? We’d love to hear from you. Please leave your comments here.